This is a post about organizing for possibility. I watched the movie 8 Mile, which stars rapper Eminem and is loosely based on his early life.

The movie features rap competitions where rappers battle each other with words. There are several rounds, and during each challenge the loser is eliminated until the final two face off for the championship. These raps are spontaneously generated because they don't know who they'll battle until it's announced. Each performer tries to one-up the other and show how clever and poetic they are (hurling personal insults an such). It takes a lot of talent to compete - a mastery with words, phrases, rhyme, and rhythm.

SPOILER ALERT: I'm about to discuss the final scene in the movie.

The dramatic ending of the movie is one of these competitions. This is Eminem's shot to show what he's got. He blasts through the early rounds, destroying his opponents with words. And then he has to battle the champion.

The mood in the room is tense and the crowd is clearly rooting for the champion. There's a coin toss to determine who will go first - most prefer to go last. The champion wins the toss. Eminem will go first.

He has 90 seconds to give his best rap. How does he approach it? A bit shaky at first but then he does something fascinating. He disses himself. He admits his flaws, he acknowledges all the bad names people call him, he fesses up to all the trash talking that could be hurled his way. He gives it to the champion, too, by revealing that he'd attended a private school and came from a finer background than most people knew (which is embarrassing). He ends his rap by inviting the champion to "tell the crowd something they don't about me."

Whoa - he takes the wind right out of the champion's sail! The champion has nothing to say and he caves. Eminem is victorious.

While I was listening to Eminem's final rap, I couldn't help but think that Dale Carnegie would be proud. You might think that sounds crazy. In How to Win Friends and Influence People (still the best book on human relations IMHO) Carnegie recommends that we be the first to be open about our failings. That we own our flaws. That we beat everyone to the punch.

This is not the same thing as being down on ourselves. I'm not suggesting this. We are all highly talented and highly flawed. And when we can be open about those flaws, we are better able to use our talents fully because because we carry mental garbage about it. Being open also allows us to better address our flaws.

And to be clear, even though Eminem dissed himself, he knew he was talented. He had dreams he knew he could fulfill if he did his best.

We can be confident and open about our flaws.

As Eminem walks out of the building after becoming the new champion, the theme song to the movie, a song by Eminem called Lose Yourself, comes on and takes us through the credits. This song was featured in a Super Bowl commercial for Chrysler (and also in 2020 for Biden/Harris). The lyrics are quite well written and motivating. And the last line of the song says it all.

"You can do anything you put your mind to."

Even though I ruined the ending for you, check out the movie if you haven't seen it. It has a lot of curse words and deals with mature themes, as we might expect from a gritty movie about struggling rappers from Detroit. You've been warned!

I include Lose Yourself on my exercise playlist because it's motivating! 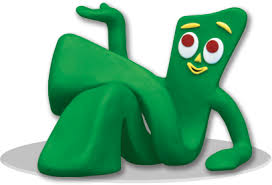 In the last post, I offered a modification to the popular BHAG - a BHAAG, adding AGILE with a nod to our current times. The major idea being that we should not wait to plan until things return to normal, that goals can be motivating and helpful as long as they're flexible.

Agile like a warmed up Gumby doll. Do you remember Gumby? He (was it a he?) had his own show and best-selling toys. When we're Gumby agile, we're able to progress forward during chaos (in satisfying and circuitous ways).

Agility is our capacity to be consistently adaptable without having to change. It is the efficiency with which we can respond to nonstop change.

Let’s break down this definition.

Consistently adaptable. When we are consistently adaptable, we can modify how, when, and where something is completed with the same confidence and efficiency that we use to make coffee in the morning. Zigging and zagging is second nature, and being adaptable does not cause great stress or worry.

Without having to change. What would this look like in action? Imagine a professional tennis player named Bjorn. In between tournaments, Bjorn practices dozens of shots with a variety of practice partners on hard, grass, and clay courts. Each tennis match is unique, but he will be better able to respond to each new challenge because he has trained himself to adapt quickly. We can train in the same way and increase our ability to respond to new situations without having to change our overall approach.

Personal example: Goal is to improve health and fitness.

Being consistently adaptable means that I've learned how to do my strength training exercises in any room, using proper or improvised weights, in longer or short bursts.

Without having to change means that I've got several different tools I can use to get to my goal. I can walk outside, ride my bike, use the Waterrower, try standing calisthenics, or practices yoga. I can switch tools to my situation and stay on track.

If your plans are too rigid or narrow, you might be setting yourself up for setbacks or failure because life throws curveballs. Olympic athletes are improvising their training for next year's games. They have to be agile in order to be prepared and competitive. It's the same for us.

The key to using BHAAGs to maintain progress during these uncertain times is agility. I know this is true for my crazy life and invite you to explore the possibilities.