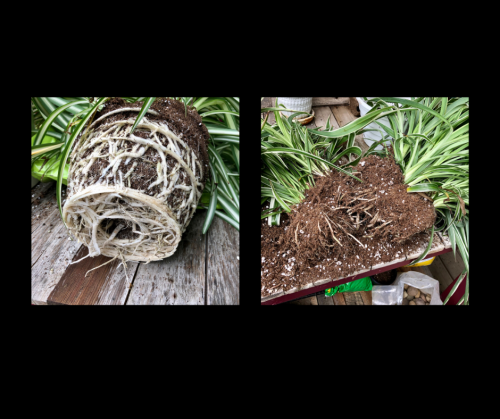 In Anthony Brandt's TEDxHouston talk, he shared how creative endeavors involve bending, breaking, and/or blending. If you're interested in creativity, I recommend you listed to Anthony's full talk.

This weekend, I'm contemplating the breaking apart part. Knowing some of my habits and assumptions are fairly ingrained, perhaps breaking some of them are in order.

Like the spider plant pictured here, we can become root-bound and stuck. Stuck in our thinking and ways and stuck with beliefs that no longer serve us. Still alive but not growing. The antidote for the spider plant, and perhaps us, is to clear away some of the hardened roots and reimagine a freer way to exist. This task involves some risk.

The planting exercise was one of my weekend mini-misadventures, but it's also a pretty good metaphor for what we all can try to make leaps forward in progress. 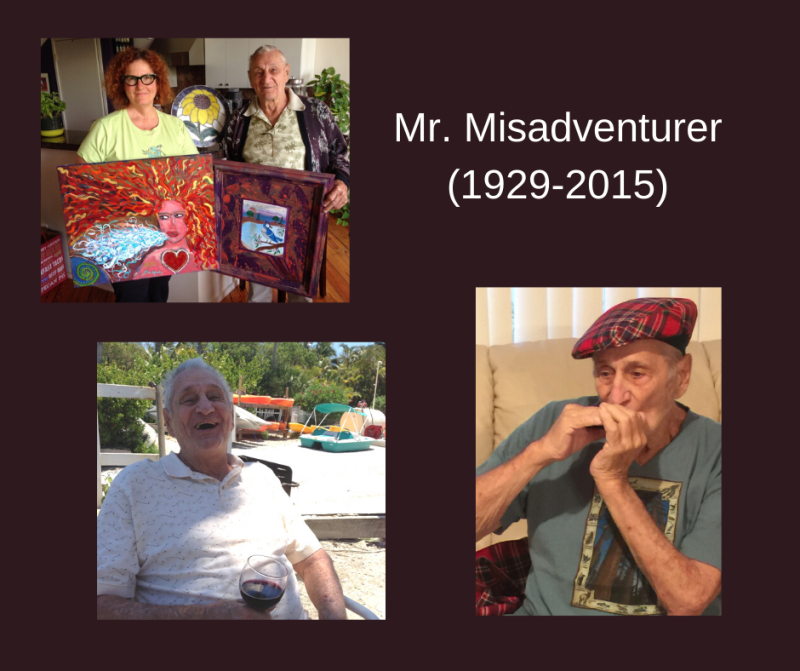 Misadventure - The Night STING Spat on Me.

I thought I'd share the story of a one-night misadventure that happened when I was in my twenties. Slightly embarrassing for sure and kind of magical. It was a time I played full out to mixed and debatable results.

In the late 80s, Sting was in reinvention mode. The former lead singer of The Police launched his solo recording career. He played pseudo jazzy music, dedicated himself to daily yoga practice, and starred in a Broadway Play called the Three Penny Opera.

I was a big Sting fan.

So I was thrilled when I saw that the Three Penny Opera would be playing at the National Theater (Theater of the Presidents!) in my home town of Washington DC. I called the ticket office and blew all the credit I had left on my Visa Card to get two front row seats.

Front row! Sting from the front row! I wanted to be close to Sting, to look directly into his eyes, to feel his breath, to get the full sense of him and to see his new and improved physical flexibility.

I asked a guy I had been dating on and off to go with me and was surprised when he agreed because he was way out of my league and I had anticipated the subtle brush off for weeks. David was classy, dressed impeccably, drank expensive Martinis, always had money, and drove a red Alpha Romero convertible. I, on the other hand, was bumblingly eccentric, a bit soft in physique, dressed using the Garanimals method, and traveled by subway to the puny efficiency apartment I couldn't afford. He told me that I had that “je ne sais quoi” and but I figured my sais quoi would one day become just ne ordinary.

I bought a fancy black dress and stilettos not made for walking so that I could look the part of an elegant theatre aficionado. We enjoyed a lovely dinner before the show and then took our seats ready to see Sting dance and sing.

And see we did! My first row spot brought me within two feet of him. Every slide of his hips and every facial expression was vivid and seemed just for me. We were connecting.

Something else just for me… Did you know that it takes a lot of air to sing Broadway songs? It does, and I know this because in addition to enjoying Sting’s theatrical performance, I became the landing spot for his spit. Especially during his dramatic rendition of Mack the Knife, which apparently requires a lot of projection.

I was in heaven. Spit is personal shit.

After the show, David and I went for post-theater martinis two doors down at the Occidental Bar in the Willard hotel. This was to be a civilized ending to a lovely evening in this most historic watering hole (Nazis! Cuban Missile Crisis!). The dim lighting, bespoke suited men, and thickly perfumed air was intoxicating. The gin was too, especially since I couldn’t hold my liquor, was on my third, and ate very little at dinner because I was afraid of popping the zipper on my new dress which I intended to return the next day due to the fact that I could not afford it.

I gazed out the window of the bar and saw a group of people walking toward The Mall (THE Mall, not a mall). Looking closer, I saw Sting in the middle of the group. “Fuck!” I yelled loud enough so that everyone in the bar turned toward me. And then I ran in my heels across the bar, down the steps, though the lobby, out the exit, and onto Pennsylvania Avenue after Sting.

Out of breath, ankles buckling.

Sting, where are you?

I couldn't believe I'd lost them and I spun around for several blocks like a drunk hummingbird on crack. My chance to find and reconnect with Sting was slipping from my grasp. How could this be?

After a couple of iffy encounters with other drunks on the street who – in all fairness to them – helped me stand back up after I fell to my knees because the adrenaline that had kept me upright was wearing off, I made my way back to the Occidental Bar and told David that what had happened was that I had a sudden and really bad charley horse and needed to run it off and but that he did not need to worry because I was fine. He bought it, smiled, and ordered another round. Je ne sais quoi indeed.

I am pretty sure it was Sting I ran after.

Does it take courage to dance alone? Or something else? 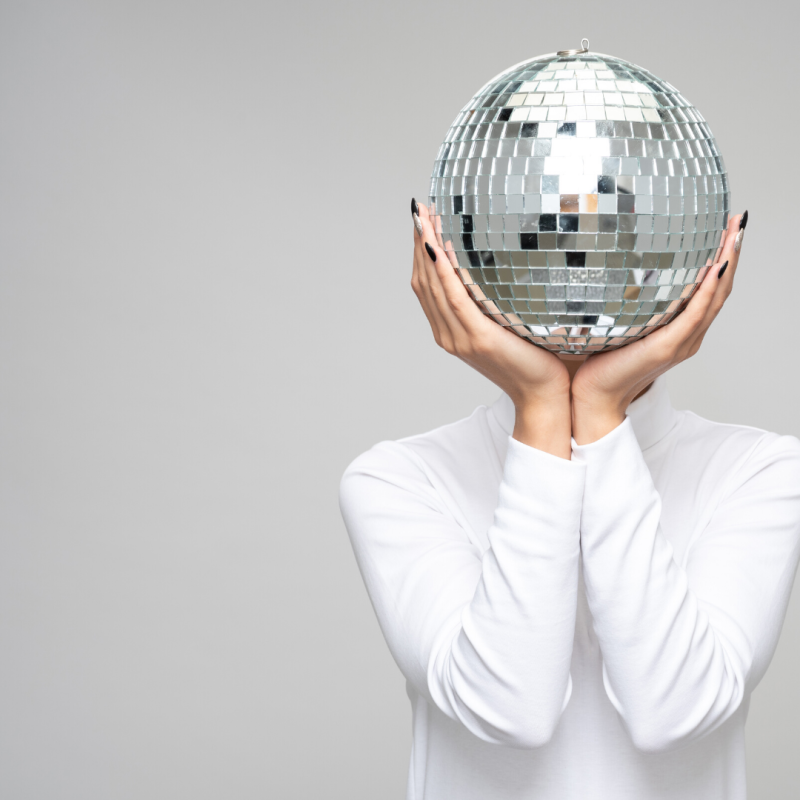 Twenty-two year old Lisa was a loner, just like the fifty-six year old version is today. Even so, this young lady loved disco music and dancing. Even more, she loved participating in disco-dance competitions. She and her partner (just a partner, not someone she was dating) won a few at the ABC Liquors lounges in the Tampa Bay area where they both attended college.  A hundred bucks split two ways was a decent haul for two near broke young adults. ABC Liquors was what we might refer to as a Tier B or C place - low hanging fruit with less competition from good dancers because the good dancers went to nicer places.

There were a few Tier A discotheques in town, too. They had dance contests, too. Young Lisa entered several but never won at a Tier A place.  Why? Were they not good enough? There was no THEY at Tier A spots. Lisa chose to enter these contests by herself. No dance partner. Just Lisa, in the middle of the small carved out area on the dance floor all by herself. Everyone's eyes on her.

Lisa was a good dancer. Not to a level worthy of being featured on a reality TV show, but good. She had a touch for the underlying rhythms of each song and loved the hard thumping songs by Frankie Goes to Hollywood, Depeche Mode, and Adam Ant.

She never won when she danced alone. Even so, she kept entering.

I don't quite understand what motivated Lisa to do this, and I don't specifically remember how she felt before during or after her solo dance performances. I remember high highs and low lows. I do remember one specific low low. After not winning, Lisa went out to the parking lot where she'd parked her piece of shit Honda 120 motorcycle. She'd left her helmet hanging upside down on the bike and it had rained. She poured out the water that had pooled in the helmet and then put it on. Water squished out from the soaked foam that lined the inside. A metaphor for the evening?

It takes a lot of...something... courage, ego, determination... something... to enter a dance contest in a crowded Tier A lounge. And double of that to enter it alone. Maybe zest, or zeal, or challenge. Remember, she was a loner, so the motivation was not to be seen or noticed. Like the older version, disco Lisa preferred to fade into the background unless something or someone in particular intrigued her. Then her movements and communication were clear, direct and focused. Dancing in front of a few hundred people was far too shotgun an approach for socialization to be the motivator.

I'm pretty sure that the key to understanding why Lisa danced alone lies in the high highs and low lows. Being humiliated, embarrassed, and a loser is not so bad as failing to play full out. Full out. Complete self-expression.

I'd like to tap back into my twenty-two year old self every now and then. Be so inspired by the potential to play full out that I risk complete failure.

My exploration of misadventures began well before my twenties, but my confidences and courage peaked during this time.

What did your younger self do that amazes you today?