As the last of four children (next oldest sibling 7 years older), and after my parents divorced after 27 years of marriage when I was 13, I lived with my mother - just the two of us - as she re-discovered her independence and life goals. Our relationship was a bit cool because she was ready for an empty nest and I felt ready to get away from both my parents. Not because they were mean or abusive, to be clear. I had a positive and mostly trouble-free childhood.

Except the trouble I sought and found all on my own, which was measurable.

Until I was in my 30s, I didn't think my mother and I had much in common. As I blossomed at the same time mom was late-blooming, I saw how wrong I was.

And how incredibly talented and creative she was.

Be both loved setting up spaces so they felt more comforting and inspiring. Our tastes were totally different: her = grays, black, and white, me= orange, red, purple, and yellow.

Be both loved - and had a knack for - writing. During that last years of mom's life, we went on yearly mother/daughter trips to writer's conferences. She was 9/10ths of the way done with her memoir called, Place Settings in Time, when she died. I finished it for her based on her notes and our conversations. Below is a picture of the front and back of her book.

We both hated cooking and weren't very good at it (but had notable specialities).

She was a loner and had one best friend. A loner mom can come across a bit icy, but this behavior may not tell us how she feels or how much she loves. I didn't understand this distinction as a child but do now. I'm the same way and might even surpass her natural inclination to withdraw or disconnect from others. And yet I love deeply like she did.

And my mom loved to learn. I'm happy I inherited/picked up that preference from her. My dad was also a life-long learner, but in a different way. He = MacGiver explorations, she = earned her bachelors and masters degrees in her fifties. I enjoy both types of experimentation and growth, which is cool.

Our relationship was the strongest just before she died. I suppose that's better than the reverse situation. We were registered to attend the Santa Barbara Writer's Conference, but that never happened after she suffered a stroke and then died from it. I on a plane heading to see her when she died. I never got to say goodbye.

Being the expert-emotion-compartmentalizer that I am, I usually slide right by Mother's Day without saying much. This year, I want to share and remember many of the things that I miss about her. 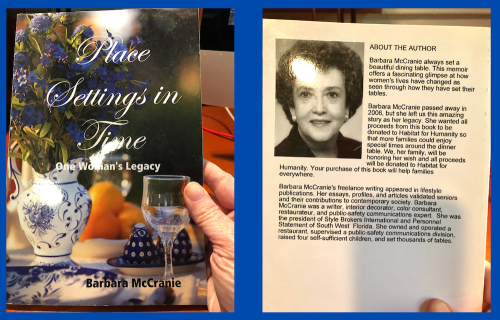