Cicadas are coming! Why I Wear Cordura Chaps 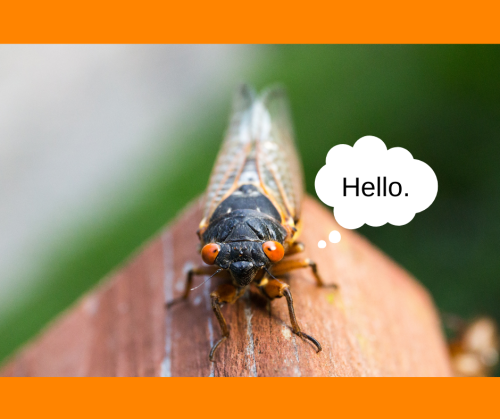 Scientists and the media are warning us cicadas will soon emerge from the earth. Some weird sh$t might happen! I have some first-hand knowledge of said sh$t, so I'm sharing my funny and almost entirely true piece, Why I Wear Cordura Chaps. I hope you enjoy the read and then prepare for the cicada invasion.

Why I Wear Cordura Chaps

I’ve been hit by crumpled burger wrappers, glowing cigarette butts, and a pink rubber flip-flop while driving my motorcycle. The laws of physics tell us, and our bruised bodies back up, that objects hurt more when they strike us while we’re driving fast in the opposite direction. The formula is: one-half the weight of the object times the square of its speed = kinetic energy. I dress for 70-mile-per-hour levels of pain.

I’ve seen bikers travel at top speeds with no windshields and wearing short helmets that didn’t cover their faces. Plain stupid, is what I called them, even if their casual protein consumption was higher than mine. Were you aware that caterpillars contain as much protein as, and more iron than, beefsteak? I didn’t know if the same held true for butterflies, which bikers were more likely to consume. I preferred the nutrients I got from foods I ingested on purpose.

I had nothing against insects and understood that much of the food we eat contains ground up bug bodies. For example, the Food and Drug Administration determined that chocolate met their safety standards as long as there were fewer than 60 bug fragments and one rat hair per 100 grams (3.5 ounces or two regular-sized candy bars). And pasta was A-OK as long as it contained less than 225 bug fragments and 4.5 rodent hairs per 225 grams (about 8 ounces). We’re all bug eaters, even those of us who think we’re vegans. A serving of canned spinach shouldn’t contain more than an average of 50 or more aphids, thrips, or mites; or two larvae or spinach worms. And while bugs were in many of our foods, I didn’t want to inhale or swallow them while riding my motorcycle. Most tasted bland or bitter served splattered raw and without the benefit of spices or hot sauce.

My Honda cruiser named Hazel had a windshield that kept most flying objects from hitting my torso and head. Most, but not all. Wind swirls sometimes rerouted horizontal rain and low-flying birds toward my bike that then smacked me in the chest, neck, and head. I once had a pigeon cream me at about 50mph and, while I know that many fine restaurants serve pigeon, I wasn’t in the mood for warm dove tartare with no capers or crusty French bread. These wind-eddy encounters were rare, and my windshield and full-faced helmet did a suitable job of sheltering my upper body.

Protecting my lower body was another matter and a greater challenge. I didn’t know what was about to hit my legs until it happened because safe driving protocols demands that I kept my eyes forward and in front of the bike. Imagine being blindfolded in a cage with a ball-pitching machine aimed at your legs. The balls come at you fast and some are spikey. That’s the difference that speed makes on the hurt that bikers experience.

To reduce pain and injury to my lower body, I wore Cordura chaps—cut long, so they’d cover my ankles and boots while riding. You might notice bikers walking funny to keep their chaps from dragging on the ground. We’re all modern-day cowboys and girls.

If I crashed, they’d keep me from scraping the skin off my legs. The durable, abrasion resistance, and waterproof qualities of Cordura prevented rain from soaking my legs and boots, and the chaps protected my knees and calves from flying debris. After an afternoon ride, I could stretch out my leg and see remains from thousands of little bugs and a few larger ones.

And then there were the enormous bugs: cicadas. I rolled into Chicago June 16th while on a solo cross-country trip. I’d heard on the news that cicadas would be invading the area as they emerged from the incubation period they spent underground. Once every 17 years, cicadas came out by the millions to live, breed, and then die. They lived only a few months above ground but made a lot of noise and a sizeable mess while they were here.

I saw a handful of cicadas on my first day in the area and hoped this would be all I encountered. No such luck. My heart sank as I rounded a curve on I-94, heading toward Milwaukee. I heard their sinister high-pitched buzz through my full-faced helmet, over the roar of my 1100cc engine, and despite the droning traffic noise. Their friction-induced screams for attention from the opposite sex warned me they were ahead, and then I saw them. Like a cloud of bulked-up flies, some the size of White Castle sliders, they floated in erratic circles. I was going seventy miles per hour in heavy traffic and couldn’t stop or avoid getting hit by their freakishly gargantuan bodies.

My motorcycle’s windshield took the blow for my upper body. They hit with a smash and then splattered part. It was disgusting. A few bounced off the top of my helmet; they’re juicy suckers. I didn’t have a fairing to shield the lower half of my body. When cicadas started hitting my knees and legs, they felt like rocks except that they broke apart on impact. Even with my Cordura chaps, my knees and calves jerked with pain each time a bug hit them. Percussive thuds punctuated their shrill buzz as the Cicadas became rush-hour victims. I didn’t slow down or want to stop; I ached—literally—to get through the ordeal. My voice boomed as I shouted into my full-face helmet. You can do this! Just focus! Don’t look at the splats. It will end soon. You’ll be OK.

I believed the cicada storm would stop if I could make it through the next mile or two. How many could there be? Although I kept my eyes focused forward, I saw people pointing at me from their cars. Counting their blessings that they weren’t me. The bombardment ended after about five minutes, and I pulled off the road and into a truck stop to wash my windshield, headlamp, front grill, helmet, and chaps. It took me over a year and many washes to get the all cicada DNA off Hazel.

Cicadas—which are high in protein and nutritious—were a staple food for many peoples, including Australian Aborigines, New Guineas, and American Indians. The ancient Greeks found the cicadas a delicacy because of their nutty flavor. Cicadas are the most desirable just after hatching (when they’re called tenerals), because their shells are still soft. Hatchlings emerge from the ground early in the morning and are easy to catch because they can’t fly for several hours. For best results, marinate live cicadas in Worcestershire sauce (this kills them, I know you were wondering), dip them in egg and flour and fry them until golden brown. Count on having fifteen cicadas per person for an entrée-sized portion.

Two days later, while I was driving north of Minneapolis, I encountered hail. It was loud and fell hard, even though the ice pellets were about pea sized. I made it through the hailstorm after two or three miles. I couldn’t seek shelter because this unpopulated stretch of highway had no overpasses or exits. In case you think I was a fool; I would’ve pulled over if the hail had been larger.

Before I took this forty-day solo trip, I used to moan about riding in gray drizzling rains common in the Pacific Northwest. Even soft rain felt like little nails when they hit my knees and calves. Our occasional fat-rain storms hurt enough to cause some bruising. I also whined to my husband when I had to drive in the rain the long way home around the Puget Sound when the ferries were out of service. My perspective about these minor inconveniences have changed because I know it could be worse.

You might wonder why I bothered with these painful pursuits. Why anyone would put themselves through a gauntlet of unwelcomed road obstacles. If you added accident stats and the high costs of bike gear and accessories to this theoretical discussion, you might suggest I should’ve re-assessed my priorities. Perhaps you think this avocation adds up to an illogical mess best avoided.

But consider this question. When we’re eighty and looking back on our lives, what will we remember? Which recollections will make us smile? I hypothesize that we won’t talk about the times we drove a silver Honda Accord to work and back or the places we didn’t go because the conditions were uncomfortable. While motorcycles provide a means a way to get from point A to point B, they also tap into our spirit of western-ho independence. Each outing offers riders obstacles and opportunities to feel victorious. We sashay off our bikes wearing our ride and full of pride because we owned the road. We have splendid stories to tell during coffee shop gatherings and on our Facebook pages.

I got stuck behind a semi that blew a tire. Chunks of hot rubber and rocks hit me for what seemed like forever. Cracked the plastic red cover on my left turn signal. I could see the driver cackling in his rear-view mirror and did the highway cha-cha to get away from the SOB. I’d show you my scars, but I wore my Cordura chaps and sustained only a few bruises. Those chaps are worth more than a lifetime supply of MoonPies. And you know how I feel about MoonPies.

My biker friends know I speak the truth. Wear Cordura chaps to ensure your misadventures don’t land you in the emergency room. And relax. A few bugs up your nose won’t kill you.