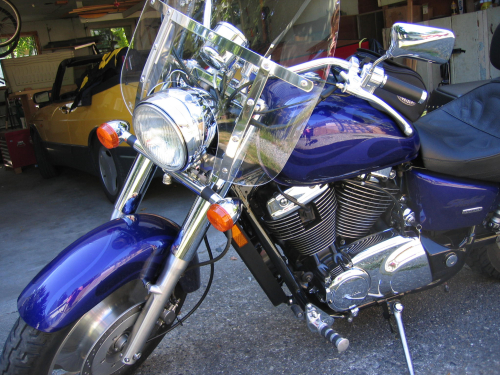 We the people are buying a lot of lavender right now (according to this story on CNN).

I've not bought lavender and am now wondering if something is seriously wrong with me. Because I love lavender.

Case in point: I named my purple motorcycle Hazel, that's short for Purple Haze. And while you might think the name referred to the Jimi Hendrix song by the same name (which I like), it was actually paying homage to a lovely lavender farm in Sequim (western Washington) called Purple Haze. We visited that Purple Haze several years ago during the Sequim Lavender Festival.

That's pronounced SQWIM, I know you were wondering.

On the when things get back to normal bucket list. The make it through the pandemic bucket list should apparently have "buy a bunch of lavender products" on it.

We're buying lavender because we're stressed and we think it will help. That's what the article claimed. It also said that there's no actual proof that lavender helps us de-stress.

But does that matter? Placebo affect and all? If we love how it smells, and tell ourselves that it's calming, then BINGO, it will be. I suppose we could ask Dr. Lavender, but I bet his answer would be pro-lavender for stress, fear, loneliness, and, agoraphobia. For all the things, lavender is the answer.

Placebos, even when we know they're a placebo (inert) are often more powerful than things that claim to not be placebos. I bet there are more placebo things than not placebo things.

I gotta go. Time to place an order for some lavender. How about you? Might make your weekend and week more ________ (fill in the blank with whatever you want, that's what's cool about placebos, they're flexible!). Perhaps I'll roast some root vegetables with Herbs de Provence, heavy on the lavender, which I'm sure will feel pretty close to being there.