I used the phrase running amok this morning to describe sprouting sweet potatoes that are vining all over my dining table. If I don't do something with them - kill or plant - the vines might just take over the kitchen. Then I wondered...where does running amok come from? Who was the first person to run amok?

Here's the fascinating story of the phrase quoted from the Mental Floss website:

"The English word most directly comes from the Malay amuck more or less meaning “attacking furiously” or “attacking with uncontrollable rage” or, more aptly, “homicidal mania.” Some theorize this Malay word may have Indian origins or be from the name of a group of professional assassins in Malabar, called the Amuco. Others theorize that it came from the Malay word amar, meaning “fight,” specifically via Amar-khan, which was a certain type of warrior. Yet another theory is that the Malay amuck ultimately comes from the Sanskrit amokshya, meaning "that cannot be loosed."

I've been to Kuala Lumpur, Malaysia, or KL, several times and enjoyed it. This capital city is both modern and traditional. I didn't witness anyone running amok there. The book, Common Phrases: And Where They Came From, suggested that the phrase was first used to describe opium addicts in Malaysia who, apparently, sometimes did extreme and violent things. I didn't hang with any opium addicts while in KL. That I know of.

I think it's doubly interesting that so many words - amuck, Amuco, amar, and amolshya - describe something ominous or dangerous. Makes me wonder about a guy I dated decades ago named Amar who seemed a bit off. Hmm.

Back to my current problem. Are the sweet potato plants furiously attacking my table or should I have used a tamer phrase to describe their advancements?

I think they are.

Let's hope we don't transition into the homicidal mania stage... 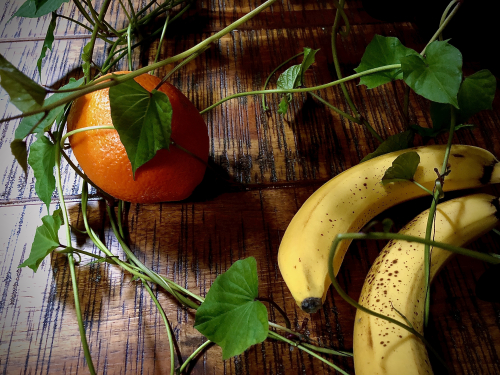