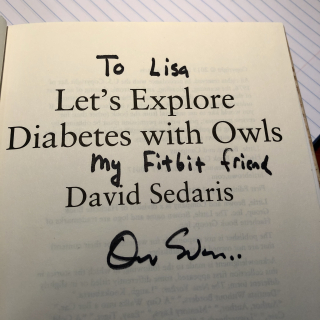 I admire those who simply MUST do X (and X is a good or decent thing) and ensure they do X even when barriers make doing X hard or near impossible. Case in point. David Sedaris' commitment (obsession) with racking up huge numbers of steps  on his Fitbit.

And by huge, I've learned that Sedaris routinely gets thirty thousand, forthy thousand, even sixty thousand steps in a day. He's even walked 20 miles in one day. And he loves beating the total daily step numbers of his Fibit pals.

I first heard about his walking habit a few years ago in a New Yorker story. Then Bill and I saw Sedaris perform and he talked about it there. While getting him to sign a book, I told him I also used a Fitbit. He signed it accordingly (see pic).

That was when Sedaris could walk through his neighborhood in Normandy (or wherever he was). Then the covid crisis occurred. This recent story from the NYT shares how David got his steps in while being home-bound and restricted in NYC. At first, he walked around his apartment for hours each day. Then, when it was allowed, he started walking the New York City streets while wearing a mask.

That's dedication! That's grit! It might be a few other things, but I admire his resolve.

But this isn't a story about steps; it's about discovering something that is important enough that we become unstoppable. What would you put in that category and how might you like the targets of your grit and determination to change?

If you made one small change in the right direction, I bet it would make a big difference. Like the Butterfly Effect.

For me, I need to get a more assertive hold on my various health issues. I have an appointment with my oncologist in a few hours and it's time to be decisive. I've been dinking around the corners and welcoming delays and inaction (some of it covid related, sure). But this is something that is keeping me zoned out and inactive. Barriers be damned. I'm ready to get this surgery over with and re-health back up to whatever my new normal can be. I've got some projects waiting for my focus and concentration (which is low right now).