Our impact on nature - the small things. 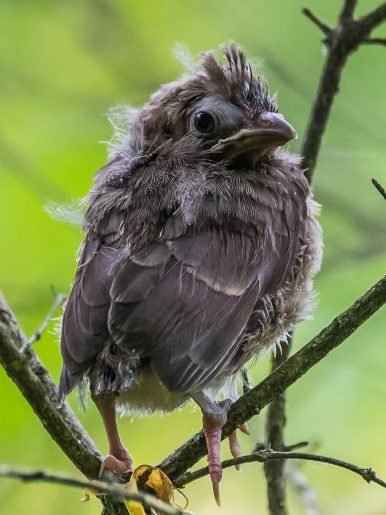 I don't know about you, but I get pretty nervous when faced with a new-to-me mother nature situation. Last week, I was watering the plants in the back yard and two adult cardinals started chirping at me. They seemed upset, not that I speak cardinal. I realized that the large hydrangea bush had a wee fledgling in it.

The little bird hopped around and tried to fly. It flew into the wooden fence on the other side of our yard, which is just 15 feet away. I shut off the water and moved away but watch. I didn't know if I should DO something.  My first instinct (generally wrong) was that yes, I need to get the little bird back up into the big tree from where it presumably fell.

I grabbed a rake and wrapped a towel around the end, so it would be a soft perch. Somehow I thought that if I extended the rake, the little bird-brained cardinal would realize I was here to help it and jump onto my express ride back into the tree.

You know that didn't happen. The parents got closer and pitched a fit. They looked ready to dive bomb me. The little bird kept trying to fly away but could only get a few feet off the ground.

The moral to this story is: Google before you do anything.

A quick search confirmed the error of my initial approach. Leave the bird unless something bigger is about to eat it. The parents will continue to feel the fledgling while it is learning to fly. It will never return to the nest.

For three days I kept checking to see if the bird was still in our back yard and alive. Because we have a very small yard surrounded by an 8-foot fence, I worried the fledgling didn't have enough space to get aloft. I worried the parents would give up if the bird did not learn quickly enough. I worried some other creature would kill it.

After the three days, there was no sign of the fledgling. Dead or alive. A promising sign was that the parents were gone too.

I choose to believe that the baby cardinal made it out and is an accomplished flying machine, versus that it was consumed whole by something else.

Did I impact its chances? Am I a big dummy? Probably. You likely know how fledglings work and what to do.

Every first offer a tiny adventure (or misadventure) and it's fun explore and learn about how other creatures live.

Now, if someone could just tell me whether I've killed my chances of getting broccoli from my broccoli plants if their leaves are filled with holes and no broccoli-the-vegetable looking shoots are shooting?